Tinker at something with determination and love, and beauty emerges.

Prior to 1990, Michel Ouellet had been taking djembe lessons when the idea came to him to make his own solid shell drum. The son of a blacksmith (the original djembe was created by Mandinka blacksmiths) with a penchant for woodworking, Michel made several which he provided to his friends. He became pretty good at it, too, but he yearned for a greater challenge – to use his woodworking skills to solve the puzzle of forming staves into a conga drum.

Eager to get going and in keeping with his desire for authenticity, Michel made his own steamer and press dryer. He cut and steamed 24 staves, and he tried, and he tried and he tried to figure out how to glue them together, but nothing worked. Perhaps out of frustration and the desire to CREATE something, Michel began making small conical drums from flat-cut staves and the Bingba (similar to the Boku or Ashiko) and the MOPERC Company was born in 1990!

The straight sides of the Bingba shells were easier to piece and glue together and after fabricating 50, or so, of them, Michel’s skills were refined, and in 1993 he revisited the 24 staves he had originally formed years earlier and he successfully crafted his very first 11” conga drum. 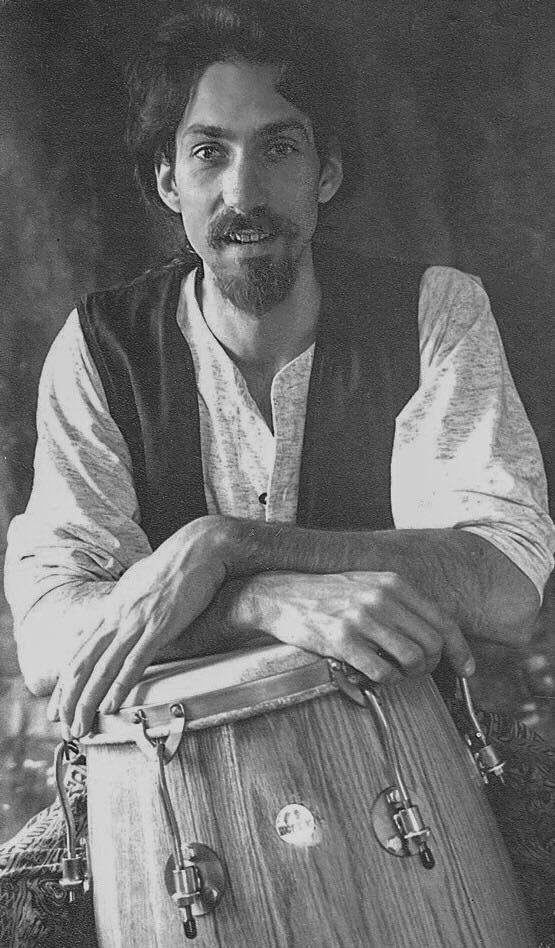 Michel then set out to replicate this success by making a set of three: Quinto, Conga, Tumba (I sure would like to know the whereabouts of these drums!). His percussionist friends in Montreal were so impressed by the pure sound and beauty of Michel’s congas that each ordered an identical set to be made, and Michel never looked back. Orders for more drums began coming in from friends, teachers and students as word about the MOPERC quality quickly spread.

So What Happened to Drum #1?

Michel sold the first conga he made to a close friend with the request that should he wish to part with the drum he would sell it back to Michel because of its sentimental and (now) historical value. The friend kept the drum for many years, but suffered a stroke in 2018 leaving him incapable of speech. The friend passed in 2019 and his daughter inherited the conga as part of her father’s estate. Without knowledge of the drum’s origination or its significance, she posted it for sale with no identifying information except for a picture.

I had several conversations with Michel about Drum #1 after becoming the owner of MOPERC in 2018, and unfortunately, the only thing he could show me was a photograph he had taken before he sold the drum. However, in November 2019, I received a message from my friend, James Williams, stating he saw a conga for sale that looked like an early MOPERC, but he wasn’t sure. He sent me the listing photo and when I compared it with Michel’s original photo I couldn’t believe my eyes – it was Drum #1! I asked James to immediately purchase the conga; I drove two hours from Danville to Montreal and Drum #1 is again in the MOPERC shop. Thanks for recovering a piece of history, James!

The drum still looks pretty good and it still has that pure MOPERC sound that originally drove Michel’s percussionist friends to purchase the first instruments he made. With the exception of cleaning the hardware with a bit of acetone, I probably won’t restore it. The shape is similar to the Custom Cubanos we currently make. It has a nice belly and it’s remarkable that the drum is still perfectly round after 27 years, though no alma was used!

The Specs of the 1st Drum 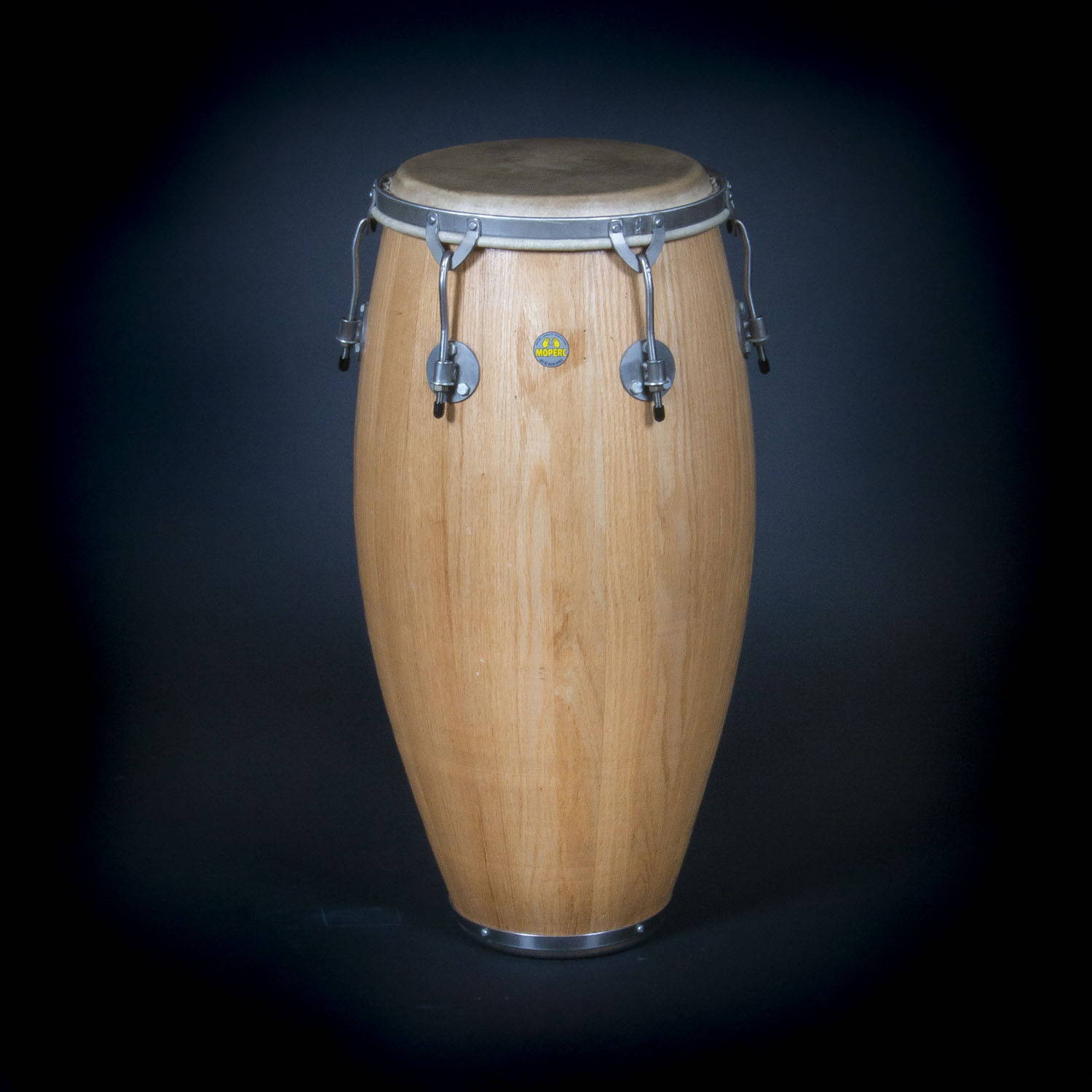 Bands: One on the bottom (probably added after with a vinyl base)

I can’t express how elated I am to have this first MOPERC reunited with the company. It was the drum that began a proud legacy that hopefully will continue well into the future, and with any amount of luck, we’ll see that first set of 3 return home soon! Thanks for reading! See you soon! 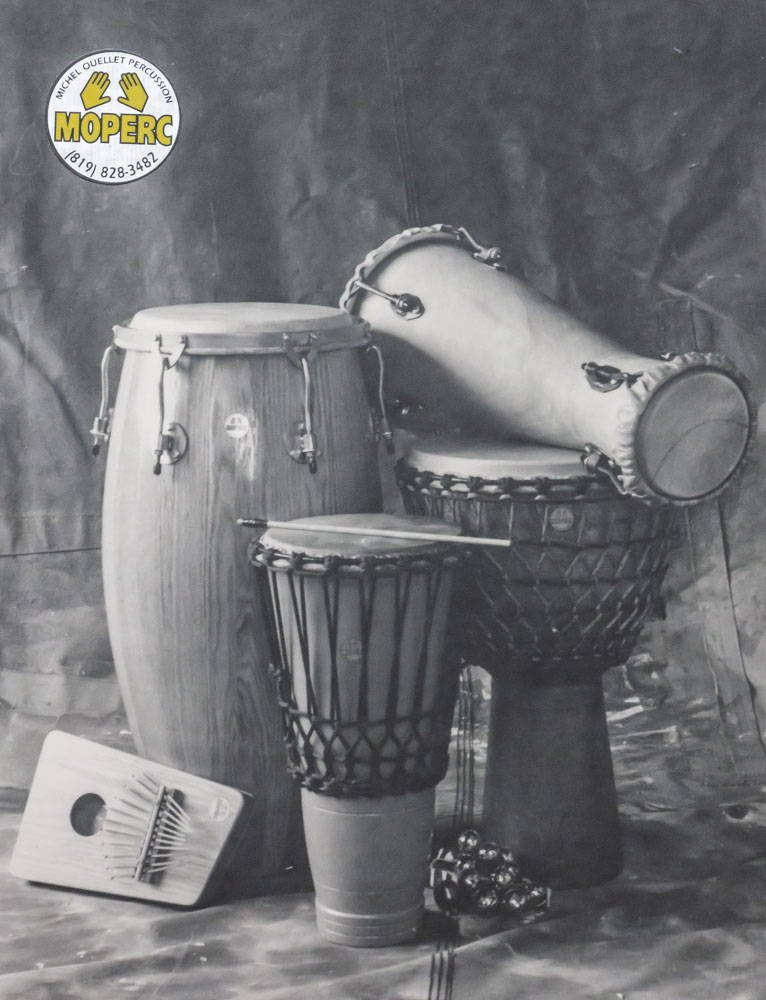